The U.S. Lost 701,000 Jobs in March, Unemployment Up to 4.4%… After two weeks of unemployment claims that topped 10 million, the unemployment rate started to reflect the effects of the economic shutdown to slow the spread of the coronavirus.

What it means – We’re not even close to the depths of unemployment that we will reach over the next 60 days.  The U.S. economy employs about 150 million people.  The lost jobs represent less than 0.5%, but that survey is taken mid-month.  Unemployment claims for the last week of March and first week of April show more than 6% applying for benefits.  It would not be surprising to see unemployment jump to 10% or more in April, and up a bit further in mid-May, before reversing course as we get people back to work. 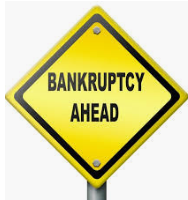 The numbers aren’t the main issue. The number of businesses that fail will determine our recovery.  If the elements of the relief package quickly make it to small businesses, then we could enjoy a swift rebound.  If the money gets lost in a sea of red tape, as in 2009, then economic revival could take a couple of years.

Markets Still Volatile As Virus Spreads.… More than one million people have now been infected with the coronavirus, and more than 50,000 have died.

What it means – We seemed to be on the rebound in the markets until President Trump estimated 100,000 dead as a low-ball number.  That got people’s attention. Pushing out the social distancing guidelines to the end of the month didn’t help.  Americans are good with pitching in, but they need to know an end date, or at least an idea of when we can get back to work.  Business owners, employees, and landlords are holding their collective breath, as are cities and states, which need tax revenue to survive.

On the flip side, the numbers in New York appear to be slowing down, and the government approved the malaria drug for use against the virus and many other compounds are under review.  Still, we need a lot more testing to find out both who has it, and who already had it and is now immune.

Motor Vehicle Sales Sank From 16.8 Million to 11.4 Million… Vehicle sales dropped by almost a third as consumers stayed home, employees worried about their jobs, and dealers were required to close in areas under shelter-in-place orders.

What it means – That sucking sound is the noise auto dealers make when they see absolutely nothing happening on their lots. No sales, almost no service, just nothing.  Dealers can still sell over the internet, but it’s not the same.  The numbers for April will probably be much lower, down around 3.5 million or so, which means a lot of steel yet to be moved.  Many dealers are independent.  They will need massive support from the new CARES Act to get through this.

Oil Remains Near 20-Year Lows … The price of oil dropped below $20 per barrel for the first time in about two decades as the Saudis ramped up supply in the face of falling demand before rebounding on news of a call on Friday among OPEC members and other producers to discuss production.

What it means – The Saudis are pretty angry.  In their fight for market share, they announced in February they would increase production to more than 12 million barrels per day starting on April 1, and they made good.  The Saudis are now loading massive oil ships, Very Large Crude Carriers (VLCCs), with oil and then sending them off with no destination.  The problem is  storage space.  There is none, so they’re treating the VLCCs as floating storage.  President Trump has talked about meeting with the Saudis to discuss the situation, but that walks close to the line of manipulating a market.  If the U.S., or U.S. producers, get involved with efforts to limit supply or support prices, are we then party to monopolistic practices?  But if we leave it be, then we risk U.S. producers going bankrupt.  Gas at less than $1.60 per gallon is great, although most of us aren’t driving much, but is it worth putting the oil patch out of business?

As for the price of oil, it jumped 25% on Thursday, but that only brought West Texas Intermediate back up to $25.  In a depressing display of geometrically linked returns, if oil increased 100% from the $20 mark to $40, it would still be 33% lower than it was in January.

January S&P Core-Logic Case-Shiller 20-City Home Price Index Up 3.9% Over Last Year… Home prices were strong at the beginning of the month as incomes picked up, but that was before corona virus.

What it means – January might as well be 2005.  Things have changed so dramatically no one knows if pricing and sales data from then means anything.  Realtors are showing homes through video, but sales will plummet.  The only question is do prices fall as well?  It seems likely unless we find a quick therapeutic for the coronavirus and the government lifts the restrictions on movement sooner than expected.

Doctors Think They Know Why New Orleans Hit Hard By Virus… Residents Are Already Obese and Suffering from Other Ailments… New Orleans has turned out to be the biggest hot spot per capita of the coronavirus, and now health care professionals are explaining why.  It’s not that they slobbered all over each other during Mardi Gras, although that might have happened.  Instead, it’s because such a large percentage of the residents already suffer from obesity, diabetes, and other ailments that compromise their immune systems.  The coronavirus doesn’t kill people, it breaks down the immune system which then allows other problems or bacteria to take hold.

What it means – The Fed has committed “whatever is necessary” to support liquidity in various debt markets. In addition, the Fed has 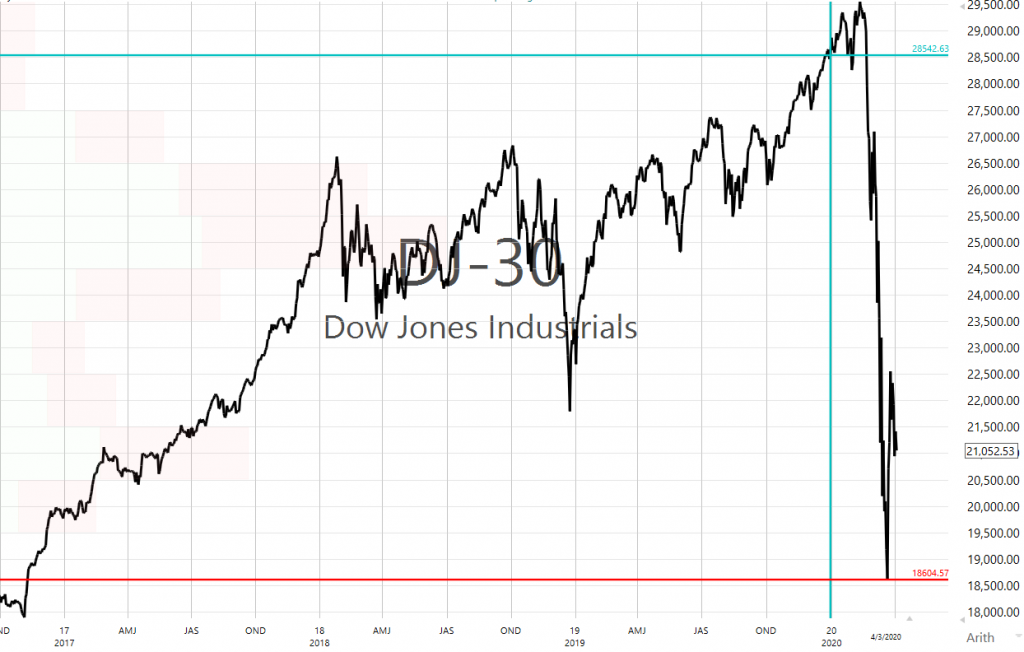 backed up the ECB’s need to support European banks.

The stock rally of two weeks ago faded last week with the Dow Jones Average closing at a level not seen since the spring of 2017.

Earnings season starts in another week. Many corporations have used stock buybacks to keep earnings appearing healthy. Reality is about to present itself to investors. Reported earnings may be declining as much as 30%! With three years of gains already unwound, even lower prices should not surprise investors until pre-crash employment levels are regained.

Our client portfolios were shifted systematically to cash over the past five months. To understand the mechanics of the process that has protected client accounts, our April Market Update video is available on-line.

Life As We Know It Has Changed – Our daily life and the operation of businesses we take for granted have not been altered as much since the Depression. 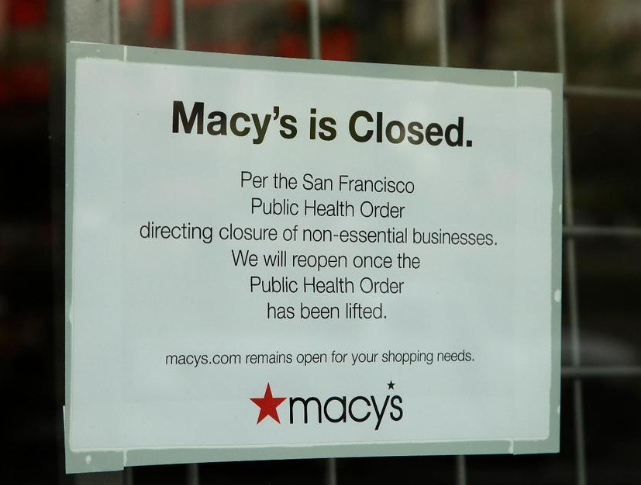 the social spacing mandates are lifted. Previously struggling retail is succumbing to on-line shopping at a pace that has not been imagined since the tech bubble of the early 2000s. Shopping malls are challenged as anchor tenants close stores to avoid bankruptcy. Macy’s is being removed from the S&P-500 and being reclassified as a junk bond risk. Others will follow as the economy adapts to a recovery from a heretofore unique global event.