Consumer Prices Rose 0.5% Last Month and 5.4% Over the Last Year… The monthly inflation gain eased from the 0.9% pace in June, but annual inflation remained stubbornly high, at the same rate as last month.

What it means— Core inflation, which excludes food and energy, rose 0.3% last month and is up 4.3% over last year. This is a bit lower than the readings for June, but it’s still pretty hot. Some people pointed to falling used-car inflation, where prices were up just 0.2% over last month and now are up just 41% over last year, as proof that higher prices are transitory, but that’s not very convincing. Yes, hotel prices jumped 6%, but that’s not a big piece of the inflation pie.

Rents, which account for more than 30% of CPI, are much more interesting. The government’s survey of homeowners to determine equivalent rent posted rents rising 2.85%. Shelter is considered an “investment” rather than a “cost of living.”

Actual apartment rents in major metro areas are up 7-8.7%! Home prices are up 23%. The 2.85% is the result of adjusting the CPI to control its impact on contracts and expectations. Even with adjustments, the cost of shelter will move higher as rising home prices work into the economy and landlords get new tenants at current rental rates.

Inflation in the family budget is closer to 10%. The Producer Price Index data confirms reality at the household level. For July, the PPI was +7.8% year over year. The gap between the CPI and PPI is the widest since the ’08-09 Great Financial Crisis.

In the last year and a half, the government and the Fed have pumped $8-11 trillion of economic support into an economy of $22 trillion. That couldn’t be inflationary. Could it?

Real Earnings Fall for the Seventh Consecutive Month… Real hourly earnings fell 0.1% in July and are down 1.2% over the last year.

What it means— When is a 4.2% annual raise a bad thing? When it’s coupled with 5.4% inflation. This is what led to earnings falling by more than 1% over the past year. It’s another reason the Fed wants to talk down inflation. If we become used to paying higher prices, sellers will raise prices. That not only eats into our savings, but also chips away at earnings. To keep up with rising costs, consumers are building credit card debt.

Current labor shortages are causing rising wages from fast food line workers to newbies on Wall Street. The next labor union contract to renew will have the power of a strike to demand higher pay. That wage hike will not be “transitory.” It never is.

Fed Officials Start Taper Talk… After inflation data was published on Wednesday, Kansas City Federal Reserve President Esther George said that we’ve made substantial progress in the economic recovery, so it’s time for monetary policy to move back toward neutral.

If the spreading COVID delta variant doesn’t derail the economy, expect the Fed to discuss cutting bond purchases to zero over 16 or 18 months, likely starting in October. This would put them on track to raise rates if they wanted to in early 2023. Long bond yields should start to slowly turn up.

The big question: Can the Fed raise rates without causing a recession, killing job growth or a collapsing stock market? If so, the Fed will be the first central bank to do so. Neither the Bank of Japan nor the European Central Bank have successfully raised rates above zero and sustained the increase.

What it means— Okay, who had “Biden will demand more oil from the Middle East” on their bingo card? The Administration correctly links lower oil production in the face of rising demand with higher prices. When did members of OPEC+ become our allies?

U.S. oil companies made us the number one oil producer on the planet in 2019. We have plentiful oil here at home. Has the Administration forgotten why we are no longer in control of our energy destiny? Do we really want to encourage more dependence on foreign providers?

Border Patrol Arrests 200,000 at Southern Border in July… U.S. Customs and Border Protection (CBP) reported that it was the busiest month for arrests in 21 years.

What it means— CBP detained almost 19,000 unaccompanied children and 76,000 people traveling as families last month, the second-highest totals ever. We’ve now detained nearly 100,000 people or more for six consecutive months, which hasn’t happened in decades. Normally, fewer people cross the border illegally in the hot summer months because of the risk of dying from heat-related issues. That hasn’t deterred people this year.

Of the people in custody, 47% were sent back to Mexico immediately, which can create more problems. People who are returned to Mexico without adjudication often try to cross again. To fight this, CBP started flying detainees to Southern Mexico to make the trip harder. 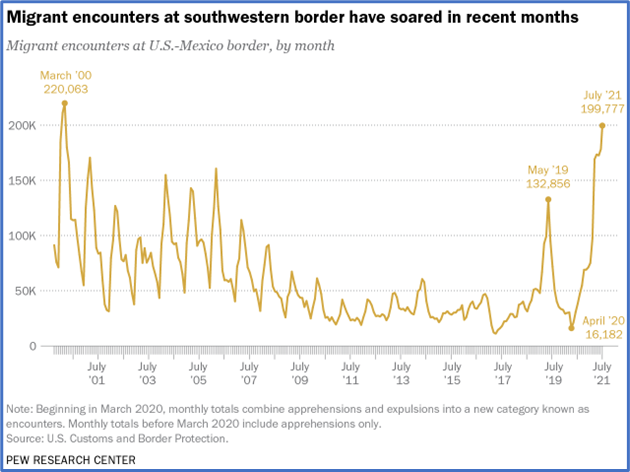