Investors Study Fed Comments at Central Bank Symposium… Fed Chair Jay Powell made the opening comments at the event, which in the past has served as the venue for announcing major policy changes.

What it means— The news is out. Chair Powell outlined tapering plans that remain extended. With the help of trillions of dollars from Uncle Sam and trillions more in Fed purchases, the economy has largely recovered from the pandemic shock.

Now that government stimulus spending is waning, the COVID delta variant is leading to economic restrictions, and economic indicators point to a slowdown. Any tapering by the Fed would likely be construed as bad for the economy – and the markets.

With Chair Powell putting off tapering, it is a dovish sign that propelled the markets higher Friday and undermines the dollar. This is what happens when investors become dependent on central bankers. We end up reacting to the decisions of a few people who sit on the Federal Open Market Committee instead of contemplating organic economic growth. It changes traditional portfolio risk assessment in favor of our RPM™ process.

What it means— The base effect is fading as the weird numbers from the spring of 2020 fall out of the comparison window, which is why the change in the number of homes sold, just 1.5%, seems sort of boring. But the change in price still grabs our attention. The median sale price, $359,900, dipped a bit from the all-time record set last month but is still high. More homes are hitting the market, which is good, but sales remain brisk, so we still have just a 2.6-month supply at the current sales pace. The market is still strong.

New Home Sales Increased 1% in July, the First Gain in Four Months… June housing starts were revised upward to an annualized pace of 1.64 million units, and July starts were expected to reach 1.65 million. Instead, starts fell to 1.53 million.

What it means— Lower new-home sales figures over the past several months had some people questioning the market. Price is the critical indicator. If builders are cutting prices to move inventory, then things might be turning lower. That’s not the case. Instead, the median new home sale price jumped to an eye-popping $390,500 last month, showing that buyers are paying up to get homes as inventory remains tight. Builders are getting a break on lumber which is  down more than 60%. Other material and labor costs have not softened. Builders are able to raise prices because we’re willing to pay up. “Inflation,” anyone? 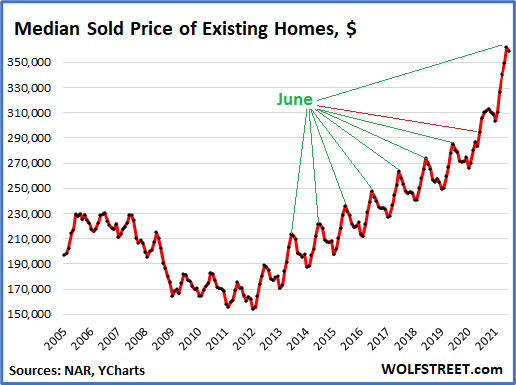 What it means— Business orders were flat for the month, which isn’t surprising after five months of gains. There wasn’t much to learn from the report, except that orders for new vehicles remain elevated even though deliveries are held down by the chip shortage. The shortage for chips needed by auto manufacturers will not resolve until next year. We haven’t seen a significant drop, yet, in durable goods orders as the government relief spending fades.

The chip shortage has altered forecasts from HP & Dell. HP reported it can’t meet demand for its products. The cost of sending a container from Shanghai to Los Angeles has grown more than six fold, according to the Drewry World Container Index. This is significant because retail spending recently dipped, which could imply a mediocre holiday season.

The manufacturer of Rubik’s Cube is uncertain that production will be profitable due to rising input costs. Toy manufacturers across the spectrum have the same struggle. Shop now for Christmas!

Meat-Packing Margins Reach $1,000 per Head… Typically, the meat-packing margin fluctuates between $100 and $200 per head of cattle.

What it means— The margin spiked to $1,000 at the height of the pandemic, as supply chains became jammed up and shoppers cleared grocery store shelves. Now, prices are spiking as restaurants fight with consumers for supply ahead of the Labor Day weekend while supply chains remain stretched.

As if that isn’t enough, the cost of staples is rising as seen in the Great Mayonnaise Inflation Mystery.

While we’re paying surcharges at restaurants and premiums at the meat counter, large producers like Tyson are raking in the bucks. The money is not flowing down to the ranchers, many of whom are selling their cattle at low prices because regional droughts have ruined hay. Some ranchers letting cattle graze on crops normally sold for human consumption. The decision is driven by drought conditions trying to maintain herds.

English Child Cuts Up British Pound Notes for Doll Faces… A young English girl wanted to change the faces on her dolls and hit upon a great idea. She’d use the “monies” from her mother’s purse. When the mom checked on the little girl, she found that the girl had cut up a 5- and 20-pound note and then pasted the queen’s face on her dolls.

The girl has three dolls, but she pointed out that her mom only had two “monies.” The young mom, who describes herself as a broke student, said she didn’t know whether to laugh or cry. Instead, she posted pics of the dolls, complete with the queen’s face on them, and asked for donations to replace the funds. She quickly raised 125 pounds and was informed that if she’d take the scraps with serial numbers to her local bank, they’d replace the notes. The mom pledged to donate the funds received to the children’s ward at the James Cook University Hospital.