What it means— The number of jobs created was disappointing, but it might not tell the whole story. The jobs number comes from the establishment survey, which only goes to companies with more than 1,000 workers. The U.S. Bureau of Labor Statistics (BLS) estimates job creation and loss at smaller firms, which adds an element of uncertainty. The BLS conducts a phone survey of 60,000 households for the Household Survey, which is where we get the data for the unemployment rate. It looks like more people are finding jobs at small firms or creating them by starting businesses, and the BLS is undercounting them.

No matter what the process, the unemployment rate fell below 4%, the Fed’s threshold for full employment. This should give the central bankers confidence in following their plans to reduce bond purchases, shrink their balance sheet, and raise rates, none of which is great for stocks or bonds.

If the Fed doesn’t act to slow inflation, the rising wage situation will make the issue worse and increasingly difficult to unwind.

What it means— From the December Fed meeting, everyone knew we were looking at tighter monetary policy in 2022, but the minutes of the meeting took a stronger tone than the December statement, sending shivers through the equity markets as bonds traded lower and yields walked higher. It’s odd to think of the 30-year bond yield of 2.09% as “higher rates,” but hey, that’s the financial world we’ve been living in. Investors holding the mega-cap tech firms that have pulled the market higher for several years raced to the exits, pushing the Nasdaq down more than 3%. Typically, the Buy-the-Dip investors rush in after such a flush, but that didn’t happen last week.

If the central bankers stick to their plan, this could be the start of a change in trend, where financials and inflation-hedge stocks lead, and favorite tech names take a back seat as rates rise. To be clear, there is almost no chance that the bankers will raise short-term rates over 1.25% or 1.50% before they to become accommodative again in response to the start of a recession. They have been in the manipulation game since 2009. There’s no graceful way out.

Job ‘Quits’ Back to Record 4.5 Million, Job Openings Lower at 10.6 Million… The number of Americans quitting their jobs bounced back to the record high, while the number of job openings fell from 11.1 million.

What it means— It’s a worker’s market. Those willing to change jobs, as long as they can pass drug tests, have the upper hand when negotiating with employers. However, we still have structural unemployment. We simply don’t have enough workers in the right locations or enough workers with the required skill sets to fill the job openings. The mismatch will be sorted out by the usual mechanism, price. Eventually, employers will pay enough to entice the workers they need and will train them for the jobs available.

Job churn hit an all-time high in November since getting a new job with better pay is not hard to do. There was no dent in the number of open positions which will not likely resolve soon given low birth rates, demographics and low immigration. 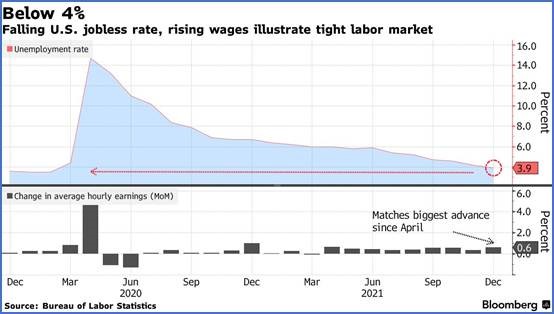 For a decade, employees in retail and leisure have been kept in low if not minimum wage contracts. With a strong economy and the hurdles mentioned above, the employees now hold the aces and wage increases are much more likely to push inflation higher. 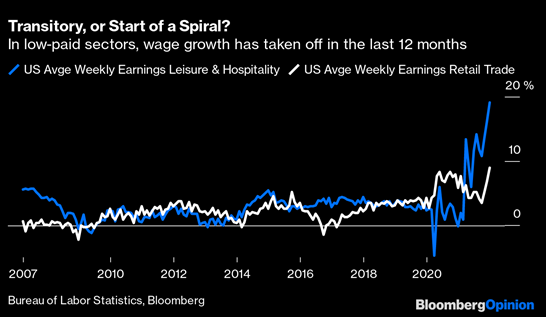 The market’s response to the weak non-farm labor report was pessimism ending the week with the worst new year start since 2016. Interest rates rose anticipating the Fed’s hikes in the months ahead.

Denver Family ‘Accidentally’ Donates Recliner With Cat Hiding Inside… ARC Thrift Store employees were surprised to find an orange tabby cat hiding inside a recliner that had been dropped off as a donation. The employees called Denver Animal Protection (DAP), which was able to get the cat out but found that its microchip was out of date. The family that had donated the chair realized the same day that the cat was missing, returned to the ARC store and were told to check with DAP. The cat was reunited with the family. That’s a sneaky way to get rid of the family pet!

END_OF_DOCUMENT_TOKEN_TO_BE_REPLACED

Click here to register now. July Market Update Saturday, July 9th at 9am. Change is the norm in ...