Fed Chair Powell Testified to Congress That Inflation is Under Control but “Concerning”… In his regularly scheduled testimony, the Fed Chair noted that prices are higher than expected, but he still believes the move is transitory.

What it means— In his Wednesday remarks, Fed Chair Powell reiterated that the current trend in prices should work itself out by the end of the year, and the bankers at the Federal Reserve stand ready to taper bond purchases and raise interest rates when it is appropriate. However, that still appears to be a long way off.

Investors breathed a sigh of relief on the news and sent the markets higher, only to reverse course when Powell seemed a bit humbler on Thursday. Then, Powell mentioned that inflation is much higher than the bank’s 2% target and even than their earlier forecasts. Then he said, “…we’re not  comfortable with that.” He went on to note that “We are humble about what we don’t understand.” He is the beneficiary of prior Chair Bernanke who told Congress “We’ve never done this before…We don’t know how it will end.” Thanks a lot, Ben.

They might become a lot humbler in the months to come. Inflation is running hot and price pressures exist ahead that could keep inflation far above the Fed’s target well into 2022. If prices don’t show signs of abating soon, investors likely will get nervous about the Fed tapering and then today’s market drop may be a foretaste of even lower prices.

Inflation Jumps 5.4%… Headline inflation increased by 0.9% in June and went up more than 5% over the last 12 months.

What it means— That’s going to leave a mark. Even core inflation excluding food and energy was up 4.5%, much higher than the Fed’s 2% target. More than one third of the current inflation reading comes from used-car prices, which were up 10.5% last month and up an eye-popping 45.2% over this time last year. Used-car prices likely will come back to earth as auto manufacturing gets back up to speed. On the positive side,  energy prices aren’t likely to jump another 45% with OPEC+ agreeing to more production.  Housing should be on everyone’s mind since it is not on Mr. Powell’s mind. During testimony he stated that “…housing is an asset; price rises here are not inflation.” That begs the question. Why is housing rent equivalent part of CPI if not indicative of inflation?

Trends in new home prices tend to show up in shelter prices between 12 and 18 months later. With home prices on fire for the last year, we’re likely to see shelter prices, which make up more than 30% of the Consumer Price Index, walk higher later this year. That could keep inflation much higher than the central bankers want and could force their hand at tapering bond purchases, then raising interest rates.

Paraphrasing Mr. Powell, he assured Congress that inflation should be viewed as temporary unless it persists year after year. The statement references the “base effect” argument posited by the Fed and Treasury and repeated in the financial press. Presumably, inflation only exists in comparison to the prior year’s data point. Actual inflation can be ignored if the data is longer. Perhaps the Fed needs to add a few five year charts to their resources. 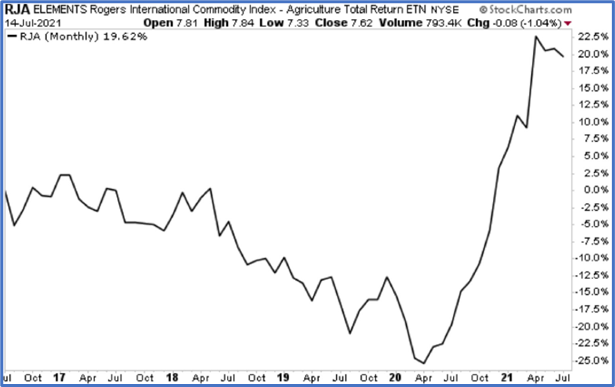 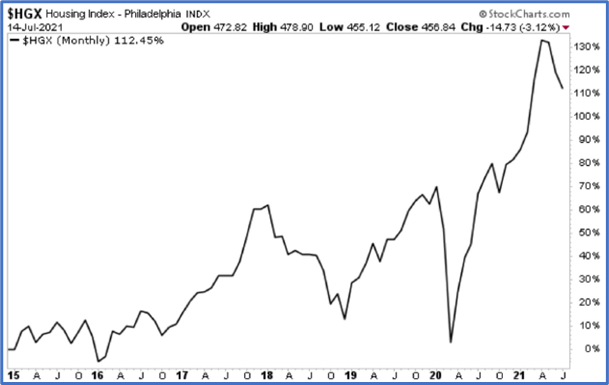 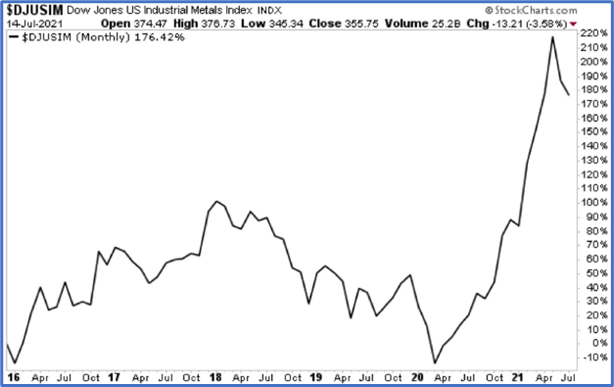 Producer Prices Up 7.3% Over Last Year… The Producer Price Index (PPI), which measures inflation at the wholesale level, increased 1% in June after rising 0.8% in May.

What it means— Producers are paying more for everything, including raw materials, goods in short supply, and labor. As with inflation, the core PPI increased at a slower pace, but it was still up 5.5%. If the supply chain squeeze moderates and commodity prices fall a bit, wholesalers might get some relief. However, employers are unlikely to trim labor costs even if more people search for work after the federal unemployment benefits run out. With every passing month, higher inflation looks more likely.

Retail Sales Increased 0.6% in June, Up 1.6% Excluding Autos and Parts… Retail sales beat the consensus estimate for a slight fall but were still held back by slumping new car sales amid the computer chip shortage.

What it means— The big jump, excluding autos, looks a bit less rosy considering the May numbers were revised lower by 0.4% to negative 1.7%. Diving into the figures reveals that consumers turned away from homebound spending on things such as furniture and building materials, down 3.6% and 1.6%, respectively. They spend more on food, up 2.3%, and at department stores, up 5.9%, as expected. We’re finally getting out of our homes and getting out on the town.

What it means— Even though that’s a headline number and not the Fed’s preferred core inflation or personal consumer expenditures, it’s still a lot more than the Fed expects. Making it worse, consumers expect wages to increase 2.6% and household income to go up by 3.0%. Those aren’t bad numbers, but they’re lower than inflation. Consumers expect price increases to outpace their income gains. This could create a cycle where consumers buy more things today to get ahead of higher prices, which drives prices higher.

New York Creamery Van Leeuwen’s Makes Macaroni and Cheese–Flavored Ice Cream… and It’s Awesome…The creamery teamed up with Kraft to make ice cream that looks and tastes like the blue-box mac and cheese. Apparently, they succeeded.

Reviewers like it and note that making cheese-flavored ice cream is fairly common in other parts of the world… but it’s not cheap. While the original Kraft Macaroni and Cheese Dinner costs $0.90 for a 7.25-ounce box, the Van Leeuwen ice cream costs $12 per pint. Mac and cheese ice cream seems to have hit the mark.

The not-so-lucky Smartmouth Brewing Co., launched a toasted marshmallow–flavored beer in 2019 called Saturday Morning Marshmallow IPA that they claim is “nostalgically ridiculous.” The beer comes in a green can with small icons on the label. The idea was to invoke Lucky Charms cereal with the marshmallows and the name. While some people like the beer, it apparently doesn’t taste like Lucky Charms.