Fed Chair Powell Tells Congress Inflation Will Pass… In his regularly scheduled testimony, Powell reiterated that the current inflation is transitory and does not require monetary tightening.

What it means— According to Powell, things are sketchy today due to shortages during the reopening, which are causing higher prices, but that will pass. He pointed to used car prices, up 29.7% in May over last year, as an example of a category where prices are significantly higher due to supply shortages but are expected to moderate in the months ahead. Hmm. Maybe.

Keeping the CPI in check is a constant challenge as prices increase. The process involves eliminating items that skew the desired result. If the 1980 CPI components were in use today, the recent 5% report would be more than double. Who do you believe? 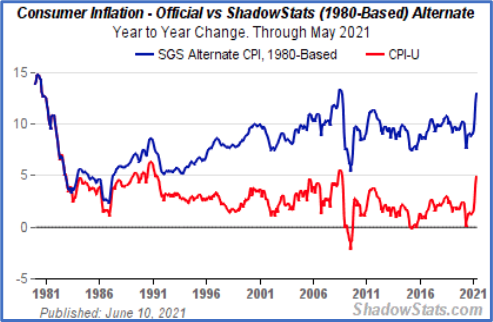 Or perhaps the labor crunch, which is forcing employers to increase wages to attract workers, will drive up prices in many areas, and higher home prices eventually will push up rents. Unlike used car prices, which can move quickly up and down, wages and rents are sticky. Once they move higher, it’s hard to drive them down. For the moment, investors have taken his words at face value and have pushed the markets higher, as their fears of Fed tightening have faded.

The Kansas City Manufacturing Survey confirmed robust business activity in spite of labor shortages and rising input costs. It is resulting in companies doing Capex spending on automation and other delayed upgrades. The data is apparently similar around the country.

One quote from a survey respondent: “With the lack of willing and able entry level workers, we are choosing to invest more in equipment and automation, which over time, should lead to our company to have a lower number of workers with a higher level of skills.” This complicates reaching the Fed’s “full employment” goal and any benefit the Dems believe will come from $15/hour minimum wage.

Existing Home Sales Slipped 0.9%, Even as Prices Notched New Record… Existing home sales fell for the fourth consecutive month, due to dwindling supply. Prices moved the other direction, and the median sale price breached $350,000 for the first time.

What it means— The median sale price was almost 24% higher in May than at the same time last year, the biggest increase on record. It took a mere 17 days to sell a home, which matched the record set in April. Rising home prices are shutting some potential buyers out of the market, but not quickly enough to ease the bidding wars. Listing prices have become starting points. This can’t last. Incomes aren’t rising fast enough to compensate for soaring home prices, so eventually affordability will be the thing.

What it means— As with existing home sales prices, the median new home sale price hit a record last month and will now set you back $374,400. However, unlike in the existing home market, where supply is dwindling, the new home market has more supply, even as prices march higher. This could be happening for a weird reason. With prices on inputs like lumber and labor soaring, home builders took a hit by agreeing to a price before construction began instead of waiting until the unit was at least substantially constructed.

We regularly review the lumber chart which is showing a possible bottom developing in prices. Consolidation among lumber yards is creating the ability to maintain or raise prices to builders. Along with lumber, other product suppliers are doing the same. Builders, facing higher input costs, are increasingly reluctant to contract.  Falling new home sales could reflect a new trend of home builders holding off on sales until later in the process. If so, then sales will rebound as soon as this initial waiting period is over.

What it means— Transportation was the thing last month, led by airplane orders. Excluding transportation, orders rose a modest 0.3%. If we dive a bit deeper and look at non-defense capital goods orders excluding transportation (a proxy for business expenditures), spending fell 0.1%. Normally, this would be a note of caution, but these aren’t normal times.

Businesses can’t spend as much as they want, because they can’t get inventory and supplies, and they can’t hire enough people to fulfill all their potential orders. The outcome is slightly lower business growth than we would otherwise have and rising prices as businesses pay more for the supplies they can find.

California Asks Residents To Avoid Charging Electric Vehicles at Night … As the heat reached triple digits in California, state officials worried about the electrical grid. They issued a Flex Alert, asking consumers to avoid using large appliances and charging EVs during the Flex Alert period, which started at 6:00 PM, just as most people arrived home. While 9% of new cars sold in California are electric, less than 2.5% of the existing fleet is electric. It’s not clear how California will manage its electrical grid as the state pushes more people to buy plug-in vehicles. The state needs consumers to charge cars during the day when solar and wind power peak, which means charging cars away from home or when they would normally be in use. The state is pushing consumers to buy such vehicles much faster than it is improving the electrical grid to handle the increased charging needs.