The U.S. Economy Created 678,000 Jobs in February… The Bureau of Labor Statistics revised the December and January numbers higher by a total of 92,000 jobs. The unemployment rate dropped from 4% to 3.9%.

What it means— The number of jobs created last month far outpaced the estimate of 440,000 and showed that the economy remains strong. But that doesn’t mean it’s all sunshine and roses. Wages rose a mere 0.03% for the month and are up 5.13% over the last year. That sounds great, except for the fact that inflation rose 7.5% through January and likely inched closer to 8% through February. When it comes to how much they can buy with their paychecks, workers are still going backward. The report likely gives the central bankers more confidence to pursue quantitative tightening in the months ahead.

Oil Tops $130 per Barrel… The price of oil rose to nearly $140 per barrel early Monday morning, and then dropped back near $120.

What it means— Western nations have taken great pains to carve out sanctions that hit Russia everywhere but the energy sector. So far, Russia can still sell oil and gas and get paid. But clients aren’t so sure. Russian oil brokers are having a hard time finding willing clients. Brokers offered Russian oil at a discount of more than $18 per barrel and had no takers. With U.S. oil  inventory at the lowest level since 2018 and the Strategic Petroleum Reserve falling to the lowest level in 20 years, this quickly is becoming a game of energy “chicken,” with Saudi Arabia in the middle.

OPEC+, which includes Russia, stuck with the plan to increase oil production by 400,000 barrels per month, even as most of the world turns its back on Russian supplies. Saudi Arabia is trying to walk a fine line between helping its strategic security partner, the U.S., and not antagonizing its cartel partner, Russia. Eventually the Middle Eastern country will have to choose. In the meantime, expect oil to stairstep higher, possibly hitting $200 per barrel this month. In the midst of the chaos, OPEC+ is struggling to meet its own production targets.

Gasoline prices will march higher as well, just in time for the summer driving season. In California, regular gasoline rose in a month from $5 to $6 a gallon. The situation could give a huge boost to auto manufacturers trying to hawk new electric vehicle models later this year.

Powell Punts on 0.50% Rate Hike… In regular testimony to the U.S. House of Representatives, Fed Chair Powell stated that he would support raising the overnight federal funds rate by 0.25% at the next Fed meeting in mid-March.

What it means— Powell’s statement was unusual. Typically, fed chairs don’t commit to moves ahead of time. They hint and insinuate but never commit. His stake in the ground on 25 basis points was meant to quash the talk of either no move or a 50-basis point hike, and it worked. The markets rallied on the news, as investors were glad to have clarity.

But there’s a problem. As forthright as Powell was about the rate hike, he was equally blunt about the plans to shrink the balance sheet. They don’t have one. Powell told the House that the plans for the balance sheet will not be finalized before the March meeting, which will leave investors speculating about how the central bank will go about easing out of trillions of dollars in Treasury bonds and mortgage-backed securities. We’re a long way from normalized Fed policy. The bankers must do a lot of quantitative tightening this year if they want to have any ammunition with which to fight the next economic downturn. Equities still face a tough road ahead, with the Fed draining liquidity.

President Biden Calls for On-Shoring in State of the Union Address… President Biden claimed that corporate America can lower costs by bringing production back to the United States.

What it means— Biden needs new economic advisors. There’s a reason companies produce goods in other countries: it’s cheaper. Even with the current supply chain snarl, it’s cheaper to make things in China or Thailand and ship them to the U.S. than it is to buy land here, build a factory, hire people, and comply with U.S. regulations.

Making more stuff here would be inflationary, driving up prices without any increase in quality or volume and wouldn’t fix all supply chain issues. While bringing production back to the U.S. would reduce the chances for disruptions along supply routes for finished goods, we’d still have potential supply chain disruptions for some of the raw inputs needed to make the stuff, which are sourced from foreign countries. This doesn’t mean the tradeoff isn’t worth it, but we need to be clear about how this works.

We take access to raw materials for granted even when they are sourced primarily from trading partners. Sanctions against Russia are needed to pressure for an end to the war. But it’s a major commodity exporter which will be less available and globally more expensive. 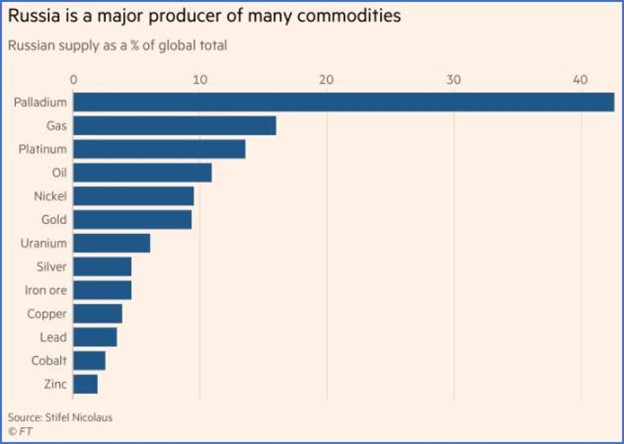 Ukraine’s National Agency for the Protection Against Corruption (NAPC) Informed Ukrainians That They Don’t Have To Declare Captured Russian Military Equipment as Income… The NAPC wanted to let everyday citizens know that they won’t run afoul of the law if they don’t tell the government they picked up a Russian tank or armored personnel carrier (APC). The NAPC’s press service wrote:

“Have you captured a Russian tank or armored personnel carrier and are worried about how to declare it? Keep calm and continue to defend the Motherland! There is no need to declare the captured Russian tanks and other equipment, because the cost of this … does not exceed 100 living wages (UAH 248,100).”

The NAPC went on to explain that war trophies don’t have to be declared because they were not acquired through a transaction but as a result of Russia’s invasion, and it’s likely that the equipment was damaged anyway, making a valuation all but impossible.