U.S. Economy Created 266,000 Jobs in April, Well Below Forecast… Analysts forecast that the economy would create more than one million jobs. The unemployment rate ticked up slightly from 6.0% to 6.1%.

What it means— Well, that’s going to leave a mark. The huge miss left people scratching their heads as businesses struggle to fill open positions. This likely reflects a few issues still holding back the economy. While businesses are reopening quickly, schools and daycare operations are moving slowly, hindering parents’ ability to go back to work. The government is paying weekly unemployment bonuses, so an estimated 40% of the unemployed make more by staying at home than by getting a job. And then there’s structural unemployment. It’s likely that many job seekers aren’t in the same locations as the jobs created or don’t have the right training.

On the plus side, it appears that another 430,000 joined the labor force, which probably represents people coming off the sidelines as more companies hire. This is why the unemployment rate ticked up, even though we added jobs.

Expect more of the same as we go through the rest of the year, with one caveat. We’re likely to see a surge in job creation when the unemployment bonuses end, but structural unemployment will last well into next year, keeping the overall unemployment rate higher than the 50-year lows we experienced at the start of 2020.

What it means— Yellen quickly qualified her comments later in the day, but the damage was done. Investors took her words as an indication that the administration and the Federal Reserve expect fiscal policy to drive inflation, which will lead to higher rates, which will push equities lower. In a way, she was just voicing what most people already believe. If you spend trillions of borrowed dollars, inflation will follow, and no matter what Chair Powell claims, the Fed will react. In the weird world of investing, the markets got a boost late in the week, when the disappointing employment numbers gave investors a bit of confidence that the Fed won’t cut its bond buying and then raise rates anytime soon.

What it means— The federal bonus programs are funded by the national government but run through state unemployment offices. The governors have short-circuited the programs to reduce the benefits, hoping to drive workers back to the labor market. Legally, every state can opt out of the program. The South Carolina governor also instructed his labor department to start enforcing job search requirements for unemployment benefits. Montana will end the benefits on June 27, and South Carolina will end them on June 30. Montana will also use federal funds to pay a $1,200 back-to-work bonus, highlighting the state’s need for employees.

While the federal bonuses clearly provide an incentive for some workers to remain on the sidelines, they don’t change the jobs picture for people without the skills necessary for open positions. It’s likely that jobs will go unfilled even when the bonus payments end.

What it means— There’s a reason investors fear inflation; all upstream markers point to higher prices. With commodity prices on everything from corn to copper shooting to the sky, it won’t be long before prices at the retail level move higher to compensate for rising wholesale prices. 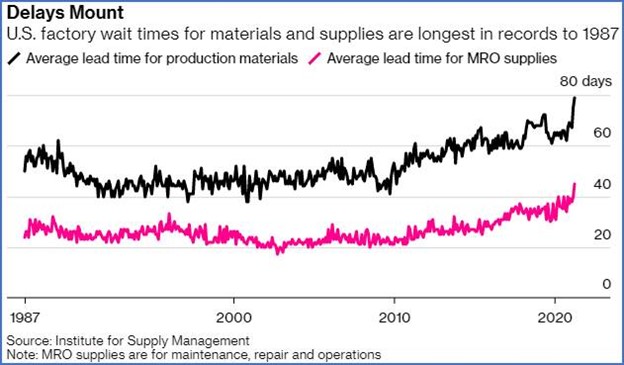 At the same time, the labor market appears to be tightening in a way that won’t be solved simply by having more people look for work. Combining higher input prices with potentially higher labor costs and then super-charging demand with borrowed money looks like a recipe for higher prices on every front. This is definitely a good time to consider an equity hedge.

In First Instance of Nonuplets, Mali Woman Unexpectedly Gives Birth to Twins, in Addition to the Seven Children She Expected… Yes, that’s nine babies, likely a world record. The doctors can be forgiven for missing the extra two kiddos in the ultrasounds, as they were busy counting the other seven. Twenty-five-year-old Halima Cisse gave birth by cesarean section in Casablanca after Malian health officials determined they could not give her proper care in her home country. The children each weighed between 1.1 and 2.1 pounds.