Federal Reserve Minutes Spook the Markets… The Federal Reserve released the minutes from its April meeting. While the bankers appeared to take a balanced view of the economy, already-nervous investors sold risk assets after the release.

What it means— Investors woke up Wednesday morning to a pukefest led by crashing cryptos and falling stocks. The markets had started to rebound, but the Fed minutes put an end to that. The bankers deliberated the speed of the economic recovery, with several noting that if we made substantial progress, it would be appropriate at an upcoming meeting to discuss tapering bond purchases.

While that statement would be correct during any Fed meeting when the central bank is printing money, investors took it as some sort of sign that bond tapering is imminent. That seems unlikely. Elsewhere in the minutes, the bankers noted that we have a long way to go before we’ve gained enough ground to back off the monetary gas.

As covered before, the Fed has clear employment goals at the top of its policy to-do list. Until unemployment across key metrics falls significantly, they’ll keep buying bonds and holding interest rates near zero.

The economic picture isn’t as robust as it was in April. Since then, we’ve seen a weaker-than-expected employment report and higher-than-expected inflation data. While one month does not establish a trend. Investors, economists and pundits will be watching economic data closely for clues about recovery.

Will inflation prove to be transitory or will it persist… Investors also are worried the Federal Reserve will keep rates low for too long.

What it means— James Politi of Financial Times reported: “The Fed has argued that strong monetary support for the economy is still needed because of the risk of a slowdown in the recovery and the shortfall in employment compared to pre-pandemic levels. Nor does it expect the current spike in consumer prices to last, arguing that it is being fueled by supply chain bottlenecks and the economic reopening.”

Others aren’t so sure the Fed is right. Last Tuesday, former U.S. Treasury Secretary Lawrence Summers said the Fed’s latest forecasts suggest it is misreading the economy and encouraging complacency, reported Greg Robb of MarketWatch.

Initial Jobless Claims Fall to 444,000, the Lowest Level of the Pandemic… The jobless claims are quickly falling toward the pre-pandemic norm around 215,000.

What it means— Jobless claims are falling rapidly. Businesses can’t find workers. Yet, unemployment remains above 6%, and we didn’t create many new jobs in April. Something’s rotten in the state of Denmark, er, in Washington, DC, and more than 20 state governments think they know what it is…federal  unemployment bonus payments.

States around the country are “just saying no” to the federal bonus payments, hoping to motivate people claiming benefits to look a little harder for work. People claiming benefits are supposed to prove that they are actively seeking employment, but it’s easy enough to lie—and with millions of people getting benefits, there’s no way state employment agencies can check on everyone.

Cryptos Get Crushed… After Musk’s tweet about Bitcoin last week, the Chinese government put limitations on cryptocurrency transactions this week and Treasury Secretary Yellen said that cryptos need regulation, which led to more selling. At one point on Wednesday, Bitcoin fell more than 30% before recovering some of the ground it lost.

What it means— Bitcoin maintains value because of its scarcity, which makes it a theoretical storehouse of value even though it goes up and down like crazy. The cryptocurrency is terrible for transactions, because it takes so long to verify exchanges, which means the Chinese announcement should be a nonevent. As for Yellen’s comments, they were expected but still don’t detract from Bitcoin’s appeal as digital gold.

If investors are buying the crypto to diversify out of fiat dollars and metals, then reporting their transactions won’t be a problem. Away from the announcements, Bitcoin, Ether and even Dogecoin had reached incredible levels. A pullback isn’t much of a surprise. If you think the digital dollars were valuable before this week, then you should consider them on sale in the aftermath of the drop.

Housing Starts Fall 9.5% in April… Home builders began construction on an annualized 1.57 million homes last month, down substantially from March, as they struggled with supply and labor shortages.

What it means— Demand remains intact, so eventually the marketplace will do its job. If there’s not enough supply, then prices will adjust, which explains why lumber prices are through the roof. There’s nothing in the bigger economic picture to suggest that real estate will slow down anytime soon. As higher prices for materials and labor make their way through the system, new home prices will likely go higher.

What it means— Falling unit sales and rising prices tell the same story we’ve been hearing since last summer: there’s little supply. As the selling season got into full swing last month, the lack of inventory was glaringly obvious. 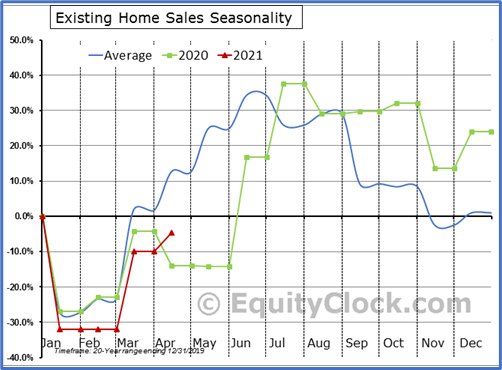 While bidding wars might be common in the San Francisco Bay Area, they’re now happening across the nation. And while it might be a great time to sell, people still have a problem: they must live somewhere.

There is a silver lining. Now is the perfect time for aging Boomers looking to ditch suburbia to sell their homes and get a flat in the city, where rents are down.

Bipartisan Postal Service Reform Act Will Make Post Office Profitable by Ignoring Debts… The biggest issue for the U.S. Postal Service (USPS) has nothing to do with mail. The service has lost billions of dollars since Congress started requiring it to prefund retiree healthcare benefits in 2006.

Every year, the Postmaster General comes to Congress, hat in hand, looking for enough cash from the general fund to make ends meet. In a rare bipartisan move, Congress might put the USPS on the path to profitability, but not by raising fees. Instead, the legislators readily agreed to allow the service to stop prefunding retiree health care, which will save it roughly $40 billion over the next decade. That won’t make the costs go away. Typical of prior legislators, the “can has been kicked down the road” for the grandkids to solve – or pay.