First-Quarter GDP Up 6.4%… This was the second-fastest GDP growth since 2003, trailing only the third quarter of last year after the disastrous second quarter of 2020.

What it means— The median estimate was for 6.5%, but why quibble over 0.1% when the number is over 6%? Unlike the surge in the third quarter of 2020, this year kicked off with stellar  growth, thanks to a combination of government largesse,  widespread vaccinations and falling economic restrictions which should carry through the rest of the year.

Spending increased in all areas, including personal consumption, fixed residential and non-residential investment and government. Inventories fell as we bought more stuff and the export/import measure dropped because we bought more from foreign markets than we sold to them. As the money flows, we’ll soon turn our attention to rising prices and scarce workers.

What it means—To paraphrase Fed Chair Powell, now is not the time to start thinking about the time to start thinking about raising rates. The bankers made clear in their statement that they want more progress on employment before they consider reducing bond purchases, which will happen before they raise the Fed funds rate. In his press conference, Powell made clear that the bankers expect prices to walk higher in the short term due to the base effect but expect inflation to moderate later in the summer. The Fed’s view of inflation through the PCE deflator is not generating concern. 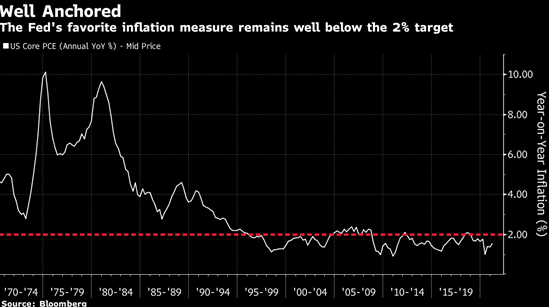 As happened during the 2010s, Powell expects workers who left the workforce to rejoin as jobs become available, which would keep a lid on wage-push inflation. He’s overly optimistic. Many of the people who left the labor force over the past year retired or chose to stay home to raise their kids. With rising asset prices, many of these potential workers are likely in good enough financial shape to remain on the sidelines. Companies are raising pay to attract workers and to meet a growing call for livable wages. At the end of the day, the extra money to pay the higher costs always comes from the same place, consumers, in the form of higher prices.

Biden Unveils the Next $1.8 Trillion Spending Plan… Dubbed the American Families Plan (AFP), the latest proposal lays out social spending that will be paid for by raising taxes on high earners and the wealthy.

What it means— It’s getting hard to keep up with all the trillion-dollar programs floating around. The AFP allocates $225 billion for childcare spending, $225 billion to create a national family and medical leave program, $200 billion for universal access to pre-K for 3- and 4-year-olds, and $109 billion for two free years of community college. It also extends the one-time child tax credit of up to $3,600 in the American Rescue Plan to 2025.

The numbers don’t work. The plan front-loads higher taxes while backloading benefits. That’s not the main issue. This plan changes the relationship between citizens and the government, making wide swaths of the population dependent on Uncle Sam for everyday costs. If that is what the people want, they will surely get it, but it puts legislators in the position of determining who gets what. Historically, governments haven’t shown themselves to be great allocators of resources. Markets are much better.

March Durable Goods Orders Up 0.5% … The increase was well below the 2.2% forecast because of falling aircraft orders. Excluding transportation, orders rose 1.6%.

What it means— Autos were a highlight, as new car orders jumped 5.5% in March after falling 9% in February. But orders aren’t deliveries, as the chip shortage keeps auto production in check. The result is a positive if you have a used car to sell as used cars are in short supply resulting in higher prices.

Durable goods orders excluding transportation and defense, a measure of business activity, rose 0.9% after falling in February for the first time in almost a year. Manufacturers say they could sell more goods if only they could get more raw materials and had more workers.

Supply shortages contribute to inflation pressures. Hapag-Lloyd, 5th largest shipper, has halted ALL shipments from Latin America which generates nearly 25% of its volume. Thanks to ports that are  backed up and unable to off-load in a timely manner. However, the backup is about half of February at Los Angeles. A contributing factor remains with the shortage of containers. Elevated rates are not likely to evaporate when demand subsides.

Typically, the marketplace sorts out such imbalances by driving prices higher.

Oxitec Releases Genetically Modified Mosquitoes in Florida Keys…A private company has released genetically modified, nonbiting male mosquitoes in the Florida Keys. These mosquitoes will mate with biting females, creating nonviable female offspring, which should dramatically reduce the overall population. The goal is to slow or stop the spread of mosquito-borne diseases such as dengue fever and zika and to improve the quality of life by reducing bug bites.

It sounds awesome, but not everyone is thrilled. Some residents worry about the potential effects on people, while others point out that mosquito larvae are food for many other creatures, such as shrimp, and that bats eat adult mosquitoes. If we remove this link in the food chain, what happens to other species? It sounds like the law of unintended consequences could come into play.