What it means— The pandemic doesn’t exist in a vacuum, of course. In addition to a rising number of cases and hospitalizations, we also have the latest “no deal” on a new stimulus bill among the White House, Speaker Pelosi, and the Senate. Adding to the confusion, it looks like President Donald Trump closed the gap with challenger Joe Biden in a couple of battleground states like Florida, which means there’s a much greater chance that we won’t know the winner on election night as we wait to count all of the mail-in ballots. The longer the election drags on, the more agitated investors become, which is not good for the markets.

All is not lost. Each of these situations will resolve. We will get a vaccine and therapeutic treatments for the virus. With the election resolved, a new stimulus bill before the end of the year become a better possibility. However, Congress does not usually have many working days between the election and the inauguration. As things happen, the markets will find a day to regain their footing.

Third-Quarter GDP Soars, Up 33.1%… The quarterly growth marked the highest level in history. Unfortunately, it followed the biggest drop in history and wasn’t enough to bring us back to even.

What it means— First, it’s probably time to quit annualizing economic growth since on a per capita basis we are just back to a 2017 level. Consumers have recently opened their wallets boosting personal consumption clocking over 25% in annualized quarterly growth. GDP now stands at 2.9% less than a year ago and is down 3.5% from the peak before the pandemic.

Christmas season is a major event for retail businesses. With supplemental payroll expired, surveys suggest households are “tightening their belts.” We’ve used a lot of gunpowder to get here, spending more than $3 trillion in borrowed stimulus money and adding $3 trillion to the books of the Federal Reserve. 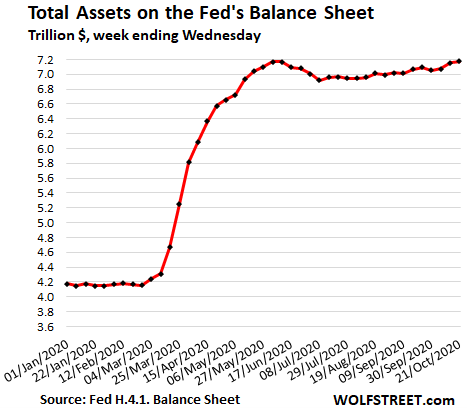 While a new stimulus bill will give us another boost, we need to fully reopen the economy if we’re going to get back to normal. Such a move depends more on developing pharmaceuticals than on sending out stimulus checks.

State Program Initial Jobless Claims Hover at 751,000… Initial claims once again printed below 800,000, which is great, but they remain very high, showing that workers are still losing their jobs.

What it means— In addition to high initial claims, continuing claims for all programs remain elevated, at 22.65 million. That represents progress, as we peaked over 30 million last summer, but we’ve got a long way to go. As time passes, we get closer to the expiration of rent moratoriums and mortgage deferral and forbearance programs. The government can’t keep moving the problem to landlords. The start of 2021 could be very difficult if we don’t have a plan for how to handle this issue.

New Home Sales Dip 3.5% but Are Still Up 32% Over Last Year… New home sales missed expectations and fell to an annualized rate of 959,000 instead of crossing over one million units.

What it means— Anyone following housing will recognize this as a blip that has more to do with available inventory and where units are located than softening demand. The S&P CoreLogic Case-Shiller Home Price Index (which needs a shorter name) showed housing prices rose 5.2% over the last year. Housing remains on fire, as city dwellers move out to the suburbs. The median sale price reached $326,800, and inventory sat at just a 3.6-month supply, well below the 6-month supply that’s considered balanced.

September Durable Goods Orders Up 1.9%… Orders for goods that last more than three months increased for the fifth straight month.

What it means— New orders excluding transportation, such as airplanes and cars, increased just 0.8%, but that’s still a win, as the average forecast was for a 0.2% drop. The 1.5% increase in orders for new cars and trucks gave the overall report a big boost. Nondefense orders excluding transportation increased 1% and now exceed their pre-pandemic levels for the second consecutive month. The orders show that consumers and businesses are still out there and remain active. It’s services, such as restaurants, sporting events, air lines, cruises, auto and home repairs and hair salons, where we have a problem that can’t be addressed until we get the pandemic under control.

Virginia Tech Professor Claims Beer Is Racist…This probably is not what the Belgian monks credited with brewing the first beer had in mind.

What it means—  Professor David Brunsma co-authored a book titled Beer and Racism: How Beer Became White, Why it Matters, and the Movements to Change It. This falls in the Mortimer Snerd category of “Who’da thunk it?”

The professor claims the book “provides a critical and interdisciplinary path to examine and understand the racial dynamics in the craft beer industry and the popular consumption of beer.” Right. That’s a lot more thought than any beer drinker we know has ever put into curling 12 ounces or lifting a pint. Brunsma’s main points seem to be that over the years beer industry executives made racist decisions about marketing and hiring. Fair enough. But using that premise, you likely could substitute any industry, because it’s about the people, not the product. It’s enough to make you want a drink.