What it means— There was good news almost across the board in the jobs report, as payrolls increased a bit more than expected, which made up for the disappointing print last month, and even that number was revised.

The U.S. Bureau of Labor Statistics pushed up the September number from a miserable 194,000 jobs to a respectable 312,000 and even revised the August figures higher by 117,000. The good news sent stocks higher. There was one fly in the ointment. The labor force participation rate remained unchanged at 61.6%, showing that rising wages aren’t drawing those on the sidelines back to work. With the economy zooming higher, employers will have to pay even more to get the workers they need, which will feed wage-push inflation. 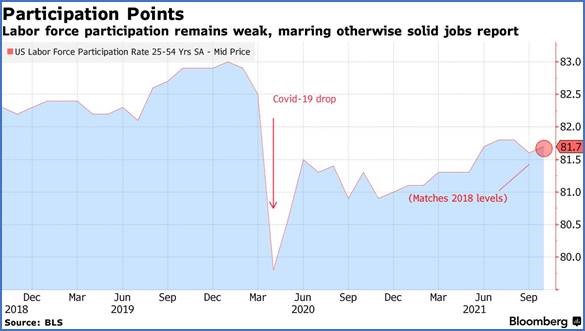 Further, unintended consequences are cropping up everywhere due to the vaccine mandates jeopardizing what even the federal government has classified as “critical” services. Public safety isn’t as important as “the greater good” for society. The next report should begin to reflect mandate related quits and terminations. Then there’s Viet Nam which has opened factories only to find employees  reluctant to come back creating a potentially negative global impact. Viet Nam is the world’s top shoe maker which has failed to deliver product in time for Black Friday sales. Nearby, China is maintaining its Covid Zero policy curbing the world’s second largest economy. China’s efforts to control Delta variant outbreaks aren’t working as planned.

The Federal Reserve Announced It Will Buy Fewer Bonds… The Federal Open Market Committee made tapering official when it announced the central bank will reduce bond purchases by $15 billion in both November and December.

What it means— The bankers didn’t set a timetable for ending their bond purchases. Instead, they chose to reduce their purchase for the next two months and reserved the right to change the pace of purchases in the months ahead in response to changing economic conditions. They used a lot of words to talk about, and around, inflation. In his press conference, Chair Powell said the bankers are stepping away from the word “transitory,”

which they have used for the last year to describe inflation. He noted that the word can be confusing, because it means different things to different people. Right. The bankers are stepping away from the term because inflation is proving to be not transitory but persistent, which doesn’t fit their narrative.

The Fed is choosing to let the economy run hot at the risk of higher inflation, which is weighing on the U.S. dollar and giving equities a tailwind. One great thing about the Fed tapering was that everyone knew  it was coming. By telegraphing the move for more than six weeks, the bankers made tapering a foregone conclusion, so it didn’t cause chaos in the markets. Open communication is a good thing.

Dow Crosses 36,000… The major stock indices reached all-time highs, with the Dow reaching the target set by authors James Glassman and Kevin Hassett in their 1999 book, Dow 36,000: The New Strategy for Profiting from the Coming Rise in the Stock Market. Just two decades early but consistent with users of Modern Portfolio Theory relying on long-term averages.

What it means— The Fed might be purchasing fewer bonds, but it still will buy $195 billion in bonds over the next two months and did not move up the timetable for raising rates. Monetary policy remains easy and real rates remain deep in negative territory. With real estate prices soaring, there aren’t many alternatives to stocks and investors are piling in. It looks like the Fed will let the economy run hot for some time, which will benefit equities over bonds, but some areas appear overheated.

Investors should keep an eye on the auto industry. Electric-truck maker Rivian expects to sell shares next week at a price that will give the company a $60 billion market cap, even though it has delivered fewer than 200 vehicles. Such a price would make the company more valuable than Honda, which sells more than 4.5 million vehicles each year. It sure looks like a bubble.

Build Back Better Gets a Dash of SALT… Speaker of the House Nancy Pelosi added a provision that will increase the state and local tax (SALT) deduction from $10,000 to $80,000. The deduction was capped under Trump in the 2017 tax reform.

What it means— The SALT deduction is a gift to those who pay high taxes and itemize their returns, meaning high earners. Democratic supporters in high-tax states such as New York and New Jersey made clear that they wanted their federal tax break back, and if the Build Back Better plan passes, they will get it.

No, Twinkies Don’t Last Forever… During the pandemic lockdown, Colin Purrington developed a case of the munchies and realized he was out of snacks. That’s when he remembered the Twinkies he bought eight years prior in 2012, when the snacks were briefly off the market. Purrington ignored the “best by” date on the packaging, which suggested the snacks be consumed within 45 days of production, and opened one that appeared to have survived intact. He retched. While the outside of the cake looked good, it had taken a turn for the worse. Another Twinkie in the pack had a brown spot, while a third looked as if it had mummified and shrunk.

Researchers who saw the story and asked to examine the snacks think they know what happened. They found traces of a common fungus on the cakes which, over time, cultivated, although at different rates. In the mummified treat, the fungus consumed all the air as it grew, causing the packaging to shrink. Twinkies really don’t last forever.