Industrial Production Down 1.3%… Factory, mining, and utility production fell in September, missing the consensus estimate for a 0.2% gain.

What it means — The decline marked the biggest drop since February, when the big freeze blanketed the nation, but it’s not as bad as it looks. Hurricane Ida shuttered oil rigs in the Gulf of Mexico last month, and the continued chip shortage has kept auto manufacturers and others from keeping up with demand. The downturn is all about the difficulties manufacturers and other producers face, not reduced demand. We aren’t alone as France and Germany report manufacturing data falling back to the lows of 2020. In the UK, slowing inflation isn’t likely to happen soon as production costs rose more than any month on record.

What it means — Someone is about to be wrong. The quantitative GDPNow model updates with every significant economic release. It has fallen steadily since August, from 6% to a mere one-half percent. The blue-chip estimate also has fallen, but not nearly as much. 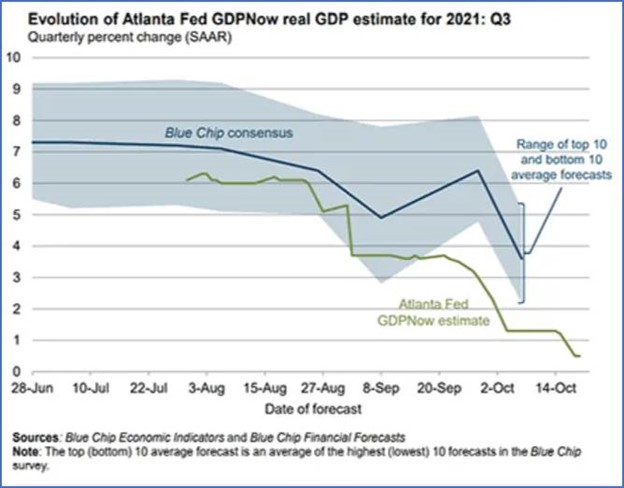 We’ll find out who is right, or at least “more right,” on Thursday, October 28, when the U.S. Bureau of Economic Analysis releases the first estimate of third-quarter GDP. With inflation running hot for everything from used cars to food and rent, lower growth will make the Fed’s job that much more difficult.

Historically, the stock market does not like higher energy costs, i.e., the ‘70s, 2000, 2008 & 2018. Higher costs have meant slower growth which is working its way into forecasts even at the Fed’s Atlanta office. Per Atlanta Fed President Raphael Bostic, “U.S. inflation is broadening, not transitory.” His statement is the first recognition from a Fed member that higher inflation may no longer be transitory.
Wage inflation is increasingly referenced in the Fed’s reports. The September average hourly wage rose at an annualized rate of 7.4%. The Beige Book from the San Francisco Fed reported that “Wage growth climbed further due to intensified competition for talent and workers’ willingness to switch jobs, with one contact from the banking sector characterizing it as a wage war.”
Consumer inflation expectations will not be fading anytime soon. Unilever, P&G, Nestles and Danone are representative of companies having raised prices with more plans to raise prices again next year due to supply problems. Persistent inflation expectations change consumer behavior – not necessarily for the better.

September Housing Starts Fell 1.6%… Builders started construction on an annualized 1.56 million homes last month, fewer than the total from August but 7.4% higher than for September 2020.

What it means — Permits also fell; they are down 7.7% from August and about even with permits from last year. The drop was mostly in multi-family housing (apartments), for which starts fell 5%. Single-family starts remained flat. Builders are pointing to shortages of building materials and labor issues as the reasons for lackluster housing starts, but it is likely there is another factor: fear.

With demand easing ever so slightly, builders are nervous about what comes next. They don’t want to be left with a lot of empty inventory if demand drops like a rock, so they’re slowing the pace of building. Even Zillow has slammed the brakes on buying up houses to flip. This should keep inventory light and prices elevated.

What it means — Tight supply is still the thing. At the current rate of sales, the industry has just a 2.4-month supply, which is keeping prices elevated. The median sales price last month was $352,000, up 13.3% over the same time last year. The higher prices are changing the complexion of sales, with a 23% annual drop in sales of homes between $100,000 and $250,000 and a 30% increase in home sales over $1 million. Last month, first-time home buyers made up just 28% of sales, the lowest level since July 2015.

Fed Governors Speak on Climate, Wealth, Diversity, and Racism… In addition to comments on the economic outlook and employment, Federal Reserve governors also spoke on a range of social issues.

What it means — Congress officially charges the Federal Reserve with maximizing U.S. employment while maintaining moderate prices and interest rates. The central bank has many monetary tools at its disposal, including setting overnight interest rates, repos, and setting reserve requirements. Over the past year, many of the Federal Reserve governors have expanded their focus to include social issues such as racism, diversity, and climate change, claiming that such factors affect the economy
and therefore, fall within their purview. Huh? That’s a bridge too far.

If the Fed’s domain is expanded to every single thing that touches the economy, then this unelected group of mostly academics will control just about every aspect of life. That’s not their charge, but it won’t stop them. Over the next year, expect the Fed to announce or recommend banking oversight policies that address social issues, which will drive more people to look for ways to escape their reach. Cryptocurrencies, anyone?

What it means — Technically, it is not a Bitcoin ETF; instead, BITO buys futures on Bitcoin, which is not ideal. futures typically trade at a premium to spot prices. Since BITO can only purchase futures, it must always buy an asset with a built-in premium, and therefore a built-in price decay, every day. This is the dreaded “roll” in futures, which will cause BITO to lose ground to Bitcoin
over time. Grayscale Bitcoin Trust (Nasdaq: GBTC), which owns Bitcoin directly, filed to convert to an ETF. If this happens, then investors will have direct access to the cryptocurrency without the hassle of a digital wallet.

Irish Required To Wear Masks in Nightclubs When They
Reopen…Unless They Are Drinking…or Eating…or Dancing… In true Irish fashion, the government announced that nightclubs will be allowed to reopen today, but only with very strict COVID-19 rules in place. Every patron must present vaccination proof and wear a mask at all times…unless that person happens to be eating, drinking, or dancing. So effectively, the face mask becomes the way to spot the social outcasts at the nightclub, because if you’re not eating, dancing, or drinking, what are you doing there? Maybe people in the restrooms will wear masks, but that seems highly unlikely.