Consumer Prices Rose 0.3% in August and 5.3% for the Year… Both the monthly and annual inflation rates were down from recent highs. Core inflation dipped to 4% from a 30-year high in June of 4.3%.

What it means— Used-car prices dropped for the first time in six months but are still up 32% for the year. The biggest decline was in airline tickets, which fell more than 9% and were the biggest reason that inflation eased modestly last month. The New York Times and other news outlets heralded this as the obvious beginning of inflation falling toward the Fed’s 2% target.

We’re not convinced. Shelter costs are on the rise, up 0.2% last month to 2.8% and likely to march higher. Realpage.com reported that asking rents rose more than 10% over the last year as occupancy rates climbed above 97% for the first time ever, and everyone knows that home sales prices are exploding higher.

Inflation is having an impact on consumer sentiment which is approaching an all-time low. Worse, even with 30-year mortgages at 2.86% only 29% of Americans believe it is a good time to buy a house which is the lowest it’s been since 1982. The USA is not the only country where housing costs are increasingly prohibitive for the general populations, whether purchase or rent. Whether a society is democratic or authoritarian, it is a potential political crisis. These two trends will keep shelter, which is more than 30% of the Consumer Price Index, on the rise.

Food prices rose 0.4% last month and are up 3.7% for the year, while gasoline prices rose 2.8% and are up 42.7%. The government excludes these categories when calculating core inflation, but all of us eat and rely on gasoline personally, for the things we purchase, or both. The pain of higher prices is too close to home to ignore.

U.S. Median Income Fell in 2020, As Did the Poverty Rate… Real median household income fell 2.9% last year, while the percentage of the nation living in poverty declined to 9.1%.

What it means— These two numbers might seem at odds, but there’s a reason they moved in opposite directions: government intervention. The pandemic rocked the economy, and 20 million people lost their jobs, which led to the fall in median income from $69,560 to $67,521. The economic shock also sent more people into poverty until the federal government passed massive stimulus programs.

Industrial Production, Hampered by Hurricane Ida, Rose 0.4% in August… The consensus estimate was for a 0.5% gain. The Fed reported that shutdowns due to the hurricane shaved 0.3% off production.

What it means— Hurricanes are common this time of year, and they often cause economic disruptions. But Ida was a particularly strong storm, and it walloped the oil and gas industry in Louisiana. To date, more than 30% of oil rigs in the Gulf of Mexico are still evacuated and therefore producing nothing, which reduces industrial production. Interestingly, even with Hurricane Ida, capacity utilization rose to 76.4% last month, the highest rate since December 2019. While that’s good news, utilization remains well below 80%, the long-run average from the 1960s through the mid-2000s.

Retail Sales Jump 0.7% in August… The gains surprised economists surveyed by the Wall Street Journal, who expected a 0.7% drop.

What it means— It’s not as if consumers threw caution to the wind and opened their wallets. The jump in August is a mirror image of the revision to the July numbers, which lowered retail sales by 0.7%, making the latest number a wash. But that doesn’t mean retail sales were weak. We’re still running 15% higher than last year, and if autos sales—a category hampered by shortages—are excluded, retail sales increased 1.8%. Part of that reflects the fact that people simply are spending, and part of it reflects inflation. With food and gasoline prices marching higher, retail sales will follow.

Inventory of most consumer items is in short supply leaving no room for discounting, and buyers are ignoring higher prices. The end of supplemental income support programs probably means we are seeing the consumers’ last spending hurrah for a while.

Inventory to sales ratio, a standard metric, reveals how much inventory is “in the back room.” Pre-pandemic normal inventory was 40 to 45 days. This July, it was 33 days. In dollar terms the data is normal until inflation adjustments are applied. (A ratio of 2 equals a two-month supply). In perspective, the recent uptick isn’t very exhilarating. 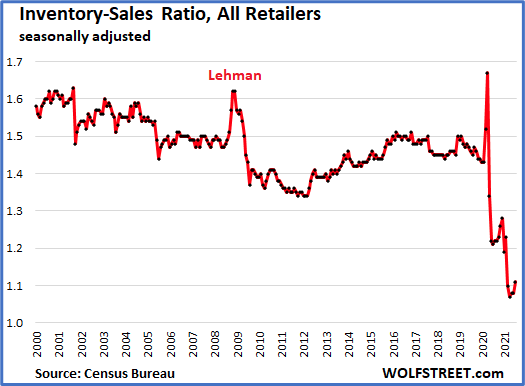 Portland, OR 911 Puts Callers on Hold for Two to Five Minutes… Most people think that when they dial 911, someone will answer. It is an emergency number, after all.

But, in Portland, OR callers can expect something else: a wait time that spans from the officially reported one minute to the seven-and-a-half-minute wait experienced by people calling to report the Pearl District shootout on September 4. The Oregonian reported that the average wait time was more than two minutes and that more than half of those who called 911 in July had to wait more than five minutes. The national average wait time is 15 to 20 seconds. Director of the Portland Bureau of Emergency Communications Bob Cozzie referred to the situation as “horrible” and suggested that the city might have to reroute non-emergency calls.